Blais-ing a trail to a veggie top chef

I love “Top Chef” and I love a theme meal, so last night’s finale episode of “Top Chef All-Stars” offered a perfect excuse. The two finalists were Richard Blais, from Atlanta, and Mike Isabella, from right here in DC. I suppose I should’ve rooted for the hometown dude, but I just couldn’t do it — Mike is certainly an excellent chef, but, seriously, his on-air persona is so cocky that it’s just hard to like him.

Besides, local DC fave Carla Hall (Hootie!) won Fan Favorite, so all’s right with the world. Love her and her determination to put “love” in her food. She’s right, of course; just like how an actor or a pitcher sometimes “just phones it in”, so can a chef. If there’s no passion behind the technique, the result is ho-hum. There’s nothing truly tasty about nutrition with no soul.

So, I went all out for Richard and decided to come up with a variation from the menu for his restaurant Flip Burger. If I ever have a reason to go to Atlanta or back to Birmingham (yes, we spent a couple of days there on our honeymoon and it was actually a very cool place), I would probably want to check it out, except for the flaw that I inevitably find at most restaurants: the lack of vegetarian options. 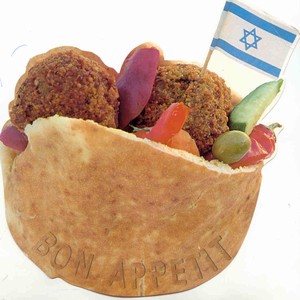 I promise I won’t preach about this, but, honestly, why is it that world-class chefs consistently resort to the falafel? Blais offers one vegetarian burger, called a Fauxlaffel, and I don’t even get the “faux” part. It’s described as a chick pea patty with tzatziki. Sounds like a falafel to me.

A few months ago, we were pretty excited to hear about a new restaurant opening up on Capitol Hill called DC-3 — a hot dog place. Fun! Except, when we went there, the only vegetarian option was a falafel dog. Seriously? Because a falafel doesn’t taste quite right on a hot dog bun with mustard and sauerkraut. In a world full of pretty good commercially-made vegetarian hot dogs, it seems like a no-brainer to have something on the menu that actually tastes like a hot dog.

Not to mention that a really good chef ought to be interested in making really good vegetarian food — rather than phoning it in. Textured vegetable protein is crying out for some culinary prowess. Richard? I know you can do it!

I took on the challenge myself for the big finale meal, and honestly, the results were fabulous — and there was even a meat-eater in our midst. I chose the Chorizo Burger from the Flip Burger menu, making really yummy handmade patties from soy chorizo combined with ground soy “beef” and soy “sausage”.

Not being the amazing trained chef and technician that Richard Blais is, I came up with my own approximation of the required smoked mayo and romesco ketchup, and both really added a great punch of flavors to the burger, which was also topped with Spanish Manchego cheese, hash browns, and a fried egg. Seriously? Delicious. 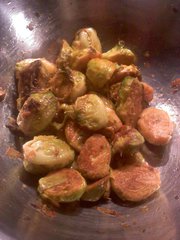 Richard clearly has the same affinity for Brussels sprouts as I do, and so I chose a dish of caramelized sprouts from Flip Burger’s salad menu, substituting a dash of Liquid Smoke for the pork in the Ginger Bacon Vinaigrette

Taking traditional recipes and translating them into a vegetarian — or vegan or heart-healthy or diabetic-friendly — version can be challenging sometimes, but there’s nothing more satisfying than making something your own. Be your own Top Chef.